A Battle with The Beast

If you’ve not yet met me and know of my beliefs, this story will give you the opinion I am some kind of raving lunatic! With all that I’ve been through… I’ve come to believe in my dreams, and the meanings behind them, more than I ever have in life. Every morning I wake from one of these experiences, I sit on my patio coffee in hand and analyze the previous night’s ordeal.

Again, as you may or may not know, I am also a member of The Alliance of Hope for Suicide Survivors. Losing my Kimmie in May of last year brought challenges into my world which no single human being should be left to face. Without the other members of this site, their kind and compassionate words, I would not be the man I am today. More honestly, I don’t think I would “be” at all. I’ve come to think of these survivors as my fellow warriors. I liken them to heroes past, with swords and armor raised against the enemy… The Beast I call depression! We have fought many a battle, The Alliance and I, and have had many victories. We may have lost a battle or two but have never given up on the war!

I’ve also become a very spiritual man. I’m not certain if its religion that guides my path today or if I’ve simply been touched by the Angels surrounding me. Yes, I said Angels. If you have it in your heart to believe, you too would know of whom I speak. They are ever-present in my life and, from what I now know, they always have been. They know of only Love. They have no hate… form no opinions… and never judge our actions. They’re only purpose here today is to help us get through trying times and past the demons that haunt our souls. Be advised my friends, they are only allowed to help if we ask them. They have enough to do battling with evil we cannot see and will let us fight alone if we do not request their aid.

Last night, I went to bed with many troubles still on my mind. Knowing this wasn’t a good thing to do, I readied myself for the dreams I was sure would ensue…

At some point in the night, I found myself standing in my family room. I wasn’t certain I was really there or if my dreams were walking my spirit through the house. Nonetheless, there I stood… feeling frightened. Of what, I was not sure but knew this feeling all too well. 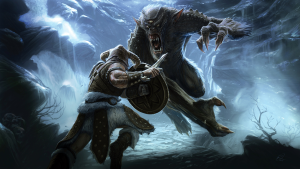 I began to hear footsteps outside. I heard the rustling of the trees as the winds began to increase and whistle through the screens of my patio. Even stranger, the moon was appearing to fade as the dark became deeper and my vision lessened. I knew it was time to focus. I knew I must concentrate on what I heard and prepare myself for what was coming my way.

Now I could hear the breath of The Beast and knew he stood beside me. I do not know if this creature is male or female but have chosen to call it “He” as I have never struck a woman but knew I would be doing so this night. My vision began to clear as I turned to face this intruder. There, in the shadows of the dark, I saw him. He was nothing but a shadow yet I was frightened by his size. He towered over me and I could feel his breath upon my skin. It was cold and reeked of pain and sorrow. I knew now I was not his only conquest this night as he had tortured many others before me. Tonight, he had reached my name on his list.

Although fear was penetrating my body I knew what I must do. I thought of my fellow survivors from The Alliance and was sure to gain strength from their words of encouragement… after all, they stood beside me tonight. I’m not sure if it was my fear of death or motivation from Kimmie but my courage was beginning to return. I swore to her, on the night she passed, to carry on her battle. I grabbed my armor and faced The Beast head-on.

I raised my shield and lunged directly towards him trying to knock him to the ground. That attempt failed as I only bounced from his chest and found myself on the floor struggling to regain my feet. I stood as quickly as I could and faced him once more. Oddly, he seemed to simply stare at me. Was he laughing? I couldn’t see his face but knew he feared me not. I had to try again or he would surely slay me this night.

I began swinging my sword at him… first from above and then rising-up beneath him. He easily brushed-off my advances as I became more and more exhausted from my aggression. I knew what his tactic was now… he was waiting for me to tire myself completely before beginning his attack. I had to regain my composure. I re-positioned my shield, drew my sword back to my side and put my right foot behind me. I was ready for his strike.

True to his nature, he came towards me. He had no weapon I could see but his arms were mighty and began to rise above him as he clasped his fists over his head and prepared to beat down upon me. I, in preparation for his blow, lifted my shield and flexed my knees to absorb the impact. My sword, still at my side.

Despite my best efforts to fend-off his attack, he easily knocked me to the floor… my knees crumpled under the weight of his arms.  I then had to drop my sword and use both hands to hold-up my shield. I formed my body into a ball and hid behind the only thing I thought could protect me most. I wasn’t quite certain what would come next but surely needed the protection of my shield.

He continued beating down on me, one arm after the other… each blow echoing throughout the house as thunder from the heavens. His breath now reeked of victory as he knew he had me right where he wanted me to be… fallen, and unable to stand in battle. I wasn’t going to make it! I knew tonight I would not keep my vow to Kimmie or my friends as I felt defeat beginning to overwhelm me. This is to be my time.

As The Beast continued his barrage of pounding upon my shield, I suddenly remembered my Angel. I hadn’t sought his help this night yet I knew he stood by in readiness. I called for him “I cannot do this alone my Angel! I need you so much right now! Please come to my aid!” Immediately, I heard his words… “Let go your hands from your shield and turn to me.” His voice was soft but oh so clear. His words were stern and left no questions as to what I was to do. I released my shield and turned for the Loving arms of my Guardian. I was sure to be safe now.

As I was acting upon my Angel’s instructions, The Beast prepared his final attack. He had once again raised both his arms above him, higher than he had before, and executed what he believed would be the final blow. As quickly as I turned towards my Angel, The Beast’s arms struck my shield with one last clap of thunder!

The edge of my shield landed sharply on the handle of my sword on the floor. I had remembered dropping it earlier and thought it was of no more use to me. Not so… the shield striking the handle sent my sword hurling in the night air. It seemed to spin for an eternity in circles and found its way to the back of The Beast… slashing though his spine like a hot knife through butter. He screamed in pain and grabbed at his back. Apparently, the gaping slash was too much for him to endure and I watched as he faded from my sight… his groaning becoming ever so distant and eventually disappearing into the darkness. 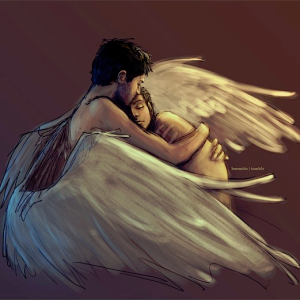 I was exhausted and draped loosely across the arms of my Angel. He carried me gently and quietly through the house and placed me back in my bed. After brushing his hands across my eyes, requesting I sleep, he was gone. I was, finally, at rest.

The morning came and it was time for my analysis. What had just happened? What brought this horrible dream to my night and caused me so much torment? I had to know the answers.

As I had mentioned, I had a troubling day yesterday. I know better than to try and sleep without first addressing the issues at hand. I hadn’t asked for help from my Angel but, instead, chose to face the night alone. I feel asleep in anger which formed the content of my dreams.

During my encounter with The Beast, I held on too tightly to what I believed would protect me and tried too hard to overcome my battle straight on! Once I released my shield and turned my body away from my struggle, The Beast simply rolled-off my shoulder and fell to the floor making him easy prey to my other weapons.

What are my weapons? My friends, my family and my memories of Kimmie will always be my armor. The undying Love I feel for all that surrounds me will always carry me through whatever challenges I face. I know if I choose to fight alone, I will fail. Also, I will never again forget to ask my Angels for their help. I know, through the softly spoken words I hear, they too will never abandon me.

One thought on “ : A Battle with The Beast”