The Healing Power of Nature

Saturday , 31, May 2014 Woody Nature Comments Off on The Healing Power of Nature 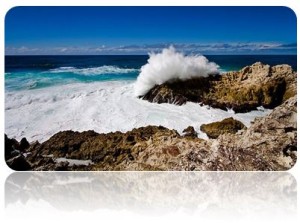 Another early morning for me today. I woke around 2:45 AM as I just couldn’t sleep any longer. Too many dreams. I decided to take a ride to the ocean. Still a little groggy, I hopped in our truck and drove to the shore. Tink was still resting from his nightly battles so I left him at home.

As you can imagine at this early hour, the beach was empty. Not a single car in any of the hundreds of parking spots along the boardwalk. I took a seat on a lifeguard stand and simply looked out over the ocean. The weather has been foul lately and the sea was choppy. It literally roared at me as the waves crashed along the shoreline. I felt as though they were reaching out at me… trying to knock me from my perch. They seemed to become closer and closer. At first a “bang” as they slammed into the many man-made levees along the beach… then a gentle “whooshing” sound as the water ebbed back to the ocean. So strong and powerful yet so calming to me.

I continued looking out across the waters. Not a single boat in sight. Nothing but darkness occasionally illuminated by the moon as the clouds drifted with the wind. I was completely overcome with awe. Ignoring the condos and businesses behind me, I focused on the sea. How majestic this was! I thought back to our history. This is what the early settlers of our land had witnessed. They too had seen this majesty from the decks of their ships and along the shore. I closed my eyes and imagined myself back then. Not only could I see and hear the power of the ocean but I could sense the grandeur of the land behind me… still untainted by the hands of man.

After twenty minutes or so it began to rain. Just a sprinkle at first but then erupting into a downpour of water pellets forcing me to pull my shirt above my head. What was I thinking? Surely this thin little tee-shirt wasn’t going to protect me from God’s cleansing waters. I just removed my shirt completely and accepted the rain.

The winds picked-up and lightning began. I watched it as it lit-up the early morning sky. God’s spectacular display of light seemed to span in each direction as far as my eyes could see. As the light speckled the skies I watched. It seemed as though I was witnessing a slide show. With each bolt of lightning, a different shape could be seen in the clouds. A mountain, a lion, a horse reared in gallantry… it was all so magic.

There I sat. Alone and completely drenched. I tried unsuccessfully to wring the water from my shirt. No use, I’ll just leave it off. My faded jeans clung to my legs as if they were pasted on. My shoes slopped in the sand as I made my way back to our truck. I saw the aura of the Sun rising in the east and knew I had to leave.

As I drove through the still fairly empty streets towards home, I pondered my early adventure. My heart was at peace. My mind was once again clear. At that very moment, I no longer felt the pain of my grief. I was at ease. It was all too clear to me what God had done. He had simply used the tools, so readily available to all of us, to calm my very soul. Once again, my belief in the healing power of nature has been confirmed.

My mind turned to Kimmie. As I thought of her the right side of my mouth curled upward… I was forming a smirk. I spoke to her: This is where you are isn’t it Moma? This is where you spend your time now? I know how happy this must make you. I know how at peace you finally are. Someday my Love, when God decides I have completed my chores, I will join you. Together again we will walk hand-in-hand amongst the clouds. Together, we will share God’s glory of nature. Until then, I will miss you and Love you always.