Tink Goes for a Ride 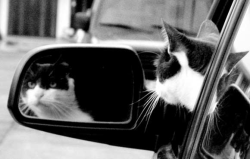 Another weekend had arrived and here we were again. Me just moseying around the house sipping my morning coffee and Tink simply lying on the floor watching my every move. He seemed to be monitoring me as if anticipating what I would do next and how he would benefit from it. Was I grabbing him some tuna? Not this time. How about fresh water in my bowl? Nope, did that earlier. Okay, perhaps you’re going to clean my bathroom or, as you prefer to call it, my kitty box? Yeah, I guess I should do that this morning. Good idea Tink… thanks!

As I struggled through my newly Tink-assigned task, I began to think. What were we to do today? We have spent so many lonely weekends without Moma we needed something more enjoyable. Maybe we could find something to do that she would have liked to do with us. That’s it I thought, but what could that possibly be?

I opened the door leading to the garage so I could toss out the little bag I had filled of presents Tink had left for me in his box. Then I saw it… and I knew. There, sitting quietly in the garage, was our truck. This was Moma’s pride and joy. She had spent months searching the Internet to find a car we could afford which would last for quite some time.

She looked at Fords. Nope, that wouldn’t work. They strangely start breaking down immediately after the warranty expired. Okay, how about a Kia? Well, as inexpensive as they may be they just don’t seem to last. Moma continued her search.

One Sunday afternoon as Tink and I watched our football games on TV she found it! She jumped up from her chair at the little desk in the corner of our family room and shouted “I’ve got it guys! A Toyota 4Runner!” She seemed quite convinced so we had to ask her why. “Well,” she went on to explain, “I’ve joined a 4Runner forum on the Internet and have seen some pretty good postings about their reliability. I’ve also found a step-by-step web site describing how to make both simple and major repairs rather easily. I think this is what we should go for!”

As Tink and I viewed the various videos on her computer we had to agree. This seemed like a pretty good choice so I guess our decision has been made. There was one problem. These trucks were pretty expensive so how would we possibly afford one? Moma had the answer… “It’s pretty simple Woody. These trucks last a good long time and we’ll just simply find an older, less expensive model.”

Her search went on for what seemed like an eternity until one day, I received a call at my office. “I found one Woody! It’s on the west coast and we’ll have to drive a while to pick it up but I really think this is it. It’s only had two owners and I spoke with the gentleman who owned it. He seemed very nice and sounds as though he has taken pretty good care of the truck.” And so… we were off to the west coast!

We had picked-up Moma’s new, prize possession on a Friday afternoon. When Saturday rolled around I woke to find her in the garage. What was she doing? Well, she was under the truck with Tink changing the oil. As amazing and unusual as this may sound, this was something Moma enjoyed. She followed all the steps in the videos to the letter! When she was through, not a single drop of oil was to be found anywhere but in her little pan. What great mechanics Tink and her!

She worked with Tink the entire week that followed. As I went to my office, they were preparing their tasks for the day. Wash the truck, vacuum and shampoo the carpeting and scrub-down the interior until it shined and smelled like a brand new car. They had done such a great job! Wherever we went in our truck with 145,000 miles on it, we felt like the royal family!

Well, Moma isn’t here anymore but maybe she would take a ride with us. Perhaps Tink and I would feel her beside us as we proudly drove our truck through town blaring our country music out of our partially opened windows. I grabbed a bottle of water from the fridge, along with a little bowl for him, and snatched-up Tink for our morning ride. “Oh boy,” he said, “this is going to be fun!”

I eased our way out of the driveway very slowly as Tink seemed somewhat apprehensive. He had snuggled down in Moma’s chair as if he were frightened. I had to reassure him… “No buddy, we’re not going to the vet today. We’re just going to enjoy a little ride in Moma’s truck.” Now, he perked up a bit.

As we drove around the neighborhood Tink began to explore. He hopped over the center console and into the back seats. He seemed to be looking for something. Maybe he smelled some new prey? I wasn’t certain. As much as I didn’t want to take my eyes off the road, I had to watch. What was my little buddy up to?

Tink had disappeared! “Where are you Tink?” I called out loudly. I hope he didn’t make his way out a window! I couldn’t see him in the mirrors. He wasn’t in the rear of the truck or in the back seat. Where had he gone?!

Suddenly he reappeared! I’m not certain where he came from but there he was again in Moma’s seat. He was sitting there like a proud little lion who had just defeated his enemy. But wait … there was more! Tink was pawing away at his nose with both hands as if wrestling an annoying gnat tickling his whiskers. What was going on here?

Having relatively poor “up-close” vision without my reading glasses, I grabbed them from the console. I saw it now. I now could see what Tink was so playfully toying with. In his adventures, he had found a long, single strand of Moma’s beautiful blond hair. How could this be? We have vacuumed out this truck many times since she’s left. There couldn’t possibly be a strand of hair that escaped our efforts! Nonetheless, this was Tink’s little present today from Moma… draped across his tiny nose as if put there purposely to annoy him.

I watched Tink play for a while. He seemed so happy with his new discovery. So content indeed. I could even hear his steady purring as he slowly began to settle and lay down lazily in Moma’s seat. The thin, long strand of Moma’s hair still across his nose.

The rain began to come. I rolled-up the windows and, once again, glanced over at Tink. He was now peacefully asleep yet still purring like a contented little kitten. Oh no! Where had that strand of hair gone?! It was no longer across his nose! Has she gone? I guess she is through playing with her little cat. This made me sad…time to head for home.

The storm had become rather harsh. The rain appeared in sheets as I struggled to see the road before me. Lightning was scattered across the sky like a fireworks display I had never seen! The thunder roared and shook the windows of our truck. It was okay though. I knew she had been here and would see us safely home.

I finally reached our house. Tink was still quietly asleep beside me. I pulled into the driveway and turned off the engine. I grabbed the wheel with both hands and let out a big sigh of relief. I bowed my head and spoke very softly to myself… “Thank you Moma. Thank you for getting us home safe and making Tink so happy today. We had such a nice ride with you.

As I opened my door and grabbed Tink to go back inside, she came to me. Before I could get one leg out of the door a long, blond strand of hair landed across my cheek. So slowly and so gently. I knew what this was… this was her… “You’re welcome Woody!”