John – A Lesson in Humility

Thursday , 19, June 2014 Woody At the Bar, Characters Comments Off on John – A Lesson in Humility

This past Sunday, as I made my rounds on my motorcycle around the county, I stopped at a friends house for a quick break. We had a couple of beers, talked about nothing in particular and just kind of wasted the rest of the morning away. He was the captain of our pool team and we were about to enter a new season of play. He told me the schedules were ready to be picked-up at bar far south from him. I, wanting nothing more than to ride, quickly volunteered to pick-up our paperwork. We finished our beverages and I bid he and his wife farewell and made my way to the south.

It was about a thirty mile journey. Along my way I was met by rain. It wasn’t the torrential downpours I’ve ridden in before but, instead, those nasty little “pellets” that just pummel your face as though being hit by pebbles. I decided I was not up to the challenge this morning and pulled off into a gas station for a break. I knew the rain would soon pass.

As I sat on my bike and watched the storm I thought about my life. Man, what a year I’ve had! My life has really sucked this past twelve months! I had lost three people I Loved and my little cat buddy whom I’d had for over thirteen years. “Could anyone ever be so tortured? What does this all mean and why I have been chosen to bear these burdens?!” were the words crossing my mind. Oh well, the rain was letting up and it was time to resume my trip.

I arrived at the bar slightly damp but in one piece. I stood in the parking lot for a moment trying to make myself look a little better than a wet cat. I knew it didn’t really matter here as this was the type of establishment where nobody really cared what you looked like or who you were. This was, for certain, the type of bar you wouldn’t ordinarily take a lady to as it was a little rough around the edges.

As I entered the doorway, I immediately noticed a dog lying on the floor at the foot of a bar-stool occupied by a man wearing a cowboy hat and raggedy t-shirt. He was sipping his beer and appeared to be watching a NASCAR race on the TV in front of him while talking to other patrons. I really didn’t think anything about the dog as this was just “that kind of place.” I turned and made my way towards the boxes of paperwork I spotted in the back corner of the bar. 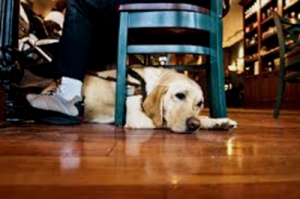 After finding our team’s schedule, I walked back towards the bar and decided to join the others watching the race. As I approached the cowboy, I squatted-down to give his dog a quick little pet. At first he quietly growled, but then allowed me to rub his head after his master looked down at him and said “Its alright honey, he’s okay.”

I bellied-up to the bar, ordered my beer and began speaking with cowboy. Throughout our conversation I started to become annoyed. Despite my best efforts to be friendly, this man just wouldn’t look me in the eye! How rude! Well, being who I am, I persisted. I reached my hand to him and said “My name is Woody.” At that point, he too lifted his hand but only in my general direction… not directly towards my out-stretched hand. We shook and he replied “Hi Woody, I’m John.” It was all too clear to me now… John was blind!

We talked and shared more beer for what seemed like hours. I soon became intrigued and had to ask. “What’s it like John? How do you get through each day not seeing anything in front of you?” John responded “Oh, I see Woody… I see quite a bit more than you might think!” He told me how he and his brother had been blind since birth but that hadn’t stopped either of them from living. Now, I became more and more curious about his life and what things meant to him. The questions ensued…

“I don’t mean to pry John but it must be hard. You’ve never seen the face of a beautiful woman… cannot watch a glorious Sunrise as I do each weekend morning or even catch a good movie with a friend! Doesn’t this ever bother you?” John was prepared as he’d obviously been asked such ignorant questions before. He then proceeded to teach me his lesson.

“I have seen some very beautiful women in my time Woody. I even married one a long time ago. I see a woman’s heart. I feel her soul and know of her beauty far beyond what you understand. I feel sorry for you as you probably speak about what her appearance is and not who she truly is… inside. Sunrise? I adore the Sunrise! I live near the shore and venture in that direction nearly every morning. I feel the power of the Sun. I absorb it much like you do and sense the warmth all over me! I know, all too well, of the strength you talk about. As far as movies, I’ve been to many. I’ve shared several films with the beautiful women I’ve met. I sit, listen to the soundtrack and lines from the actors and can see their story very clearly. More often than not, the scenes that I see are far better than what is portrayed on the screen. Do you understand Woody? Do you see me? Can you feel what I see?” I have been humbled.

It starting getting late and our conversation was coming to a close. I apologized for my curiosity and thanked him for his lesson. He smiled at me and reached for my hand once more. “Be careful out there on that thing Woody… the rain is fast-approaching!” Again, I had to ask “How did you know I was on a bike?” He said nothing but merely tapped on his chest and smiled again.

The ride home was definitely a wet one. Somehow, it didn’t really matter to me now… I was thinking of John’s words and how I wish I could feel what he feels. I eventually pulled into my garage, soaking wet from head to toe. Instead of stripping as I normally would I walked back out into my driveway. I then just raised my head towards the skies and let the rain continue its cleansing. I have been humbled and taught a lesson today. Thank you John and thank you to my Angels for protecting my ride home. I will never again take for granted the very few things I have and not concentrate so much on what I don’t!