Today I took a ride. As I typically do when not working, I visited the shore for Sunrise. The clouds had engulfed the sky and my precious Sun had to work extra hard to show her strength. Nonetheless, she did. She burst through an opening, warmed my face and retreated into the sky. Still, I sat and watched her for a while. I did as I normally do and spoke to those I’ve lost. I know they heard me as I felt their responses deep within me. My heart, again this morning, was blessed.

The people began to come and I decided it was time to leave the beach. I just could not bear to watch as they scattered the sand with cans and bottles and other trash they just couldn’t seem to make their way to the receptacles to deposit. We’ve become quite the lazy species.

Betsy and I rode the shoreline for about two hours. She purred beneath me as the tunes on my radio calmed my spirit. I know its just me but country music just seems to relax me no matter what song may be playing. It just seems so honest and real and I never feel the need to drop my pants below my waistline.

When the traffic began to build, we headed west. I have a ‘quite spot’ where there are still signs of Mother Nature untouched, in places, by man… back in the everglades where the waters are calm and animals still roam freely. Here, they are unafraid of man as it was in the beginning of time. This, I knew, would sooth my mind and prepare me for my day. 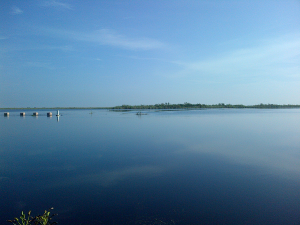 I found my space unoccupied…a small slab of concrete very near the water and just tall enough to keep my feet from getting wet. As I sat, just beneath my shoes, I saw ‘my rock.’ It seems I’ve adopted this small stone as its always there and never moves from its location. Its represents consistency to me for reasons I still don’t know. A symbol of strength perhaps.

I sat there for about two hours. I watched the fishermen come and go. I saw the air-boats, propellers roaring, make their way to the remote everglades. Where they were going and what their intentions were is still a mystery to me. I had never been on such a venture. When they finally faded into the distance I found my peace once more.

As I recited my prayers I looked across the water. A fairly large alligator was passing my way and appeared to stop and say hello. He turned towards my perch and just sat there for a moment. I spoke to him, as if he understood, as he glared at me saying nothing. “Hey little buddy… looking for breakfast?” I then waved goodbye and he was off to his next resting place. He clearly had no interest in my scrawny little frame.

As more and more people entered our sanctuary, Betsy and I decided it was time to leave. I put my key in her ignition and she seemed to start herself… once again purring as only a fine-tuned engine could. I heard her say “Hop on Woody, let’s blow this Popsicle stand!” Time to ride.

We rode together for another hour or so eventually winding-up at a park in the west. Here is what we observed there… a man sitting in his car alone, un-started, just staring across the lake before him. A woman and her dog sitting atop a picnic bench looking as though they were having a conversation. She would occasionally look down at the grass as if disappointed at what her well-behaved pooch had to say. Another, somewhat older gentleman, pacing back and forth with hands crossed behind his back in front of the pavilion where Kimmie and I had seen many a concert before. What were they all doing? What were they all thinking? Are their hearts in sadness? I just didn’t know but, knowing me, I had to learn.

I startled the man in the car as he seemed to jump in his seat when I said “Hi, how’s it going?” Not meaning to frighten him, I added “I just saw you sitting here and thought I’d say hello.” I also asked if this was his ‘special spot’ to find peace and solitude before the busy holiday weekend as I sought. “Naaa… my girlfriend just took a job in California. We used to come here and walk every weekend to just spend time together and get some exercise. Just kind of missing her.” Oh, I clearly understood.

The woman’s dog growled at me as I approached the picnic bench. She grabbed his leash, patted his head and said “its okay baby, relax.” Feeling much more confident with her pet under control, I walked right up to her. “Hi, how are you this morning?” She looked at me like I had two heads… I mean, after all, this was Boca Raton! There isn’t any friendly morning-people in this town! Regardless, she chose to talk with me a while. She was a busy, executive-level working girl and didn’t have a lot of time to herself. Her only dedication was to her dog. She said she didn’t have room for a relationship as that was just far too time-consuming for her to achieve her goals. We spoke for just a while longer and I left. Before doing so, I think I shocked her as I walked away saying “I’m so sorry.”

The older gentleman seemed excited as I approached. I got within feet of him and he burst out with “Mornin’!” I responded likewise and reached-out my hand to introduce myself. He eagerly grasped my out-stretched hand and smiled. His teeth were mostly non-existent but still, his smile warmed my heart. He and I spoke the longest. He told me that his wife was ill and at home and he came here to talk with God. He was seeking relief for her. Apparently, she could no longer hold a conversation and didn’t even really know who he was anymore. He came here for solace. After speaking for another fifteen minutes or so, we agreed to meet here tomorrow. I had a new friend indeed.

I eventually arrived back home, dodging the rain as best I could. I stripped-off my clothes in the garage, made my way to the bedroom and logged-into My Forum. As I have been lately, I just read a lot of the posts… responding again to none. I’m now learning more from these friends as I had over the past year. I call them friends but, in reality, they’re more like family. Honestly, only they could possibly understand the continuing pain and loneliness of losing someone you treasured so dearly to suicide. Only they really knew of the man I truly am. I Love them all so much.

I cut and pasted many of their stories for my book. Always leaving their names and logins off the articles, I am simply trying to make the rest of the world aware of what it is we go through and the difficult struggle life has become for us… yet, we move forward.

Along with what I read on The Forum, I thought about the loneliness I encountered at the park this morning. Why must it be this way? I’m sure you’ve heard me say it before but why are so many people so lonely when there are so many others alone?! It just doesn’t make sense to me at all!

I created this web site for a reason. I made it for me, you and anyone else out there that may have something to share or just want someone to talk to. I’m putting it out there for you… my heart is yours! My ears are wide-open and my shoulders strong… you have my full attention! Please understand that anything you may have to say is something somebody else is holding inside. Help them release those emotions! Show them your hearts and reach out your hands to lift them to their feet. Tell us your story and make us smile knowing we’re not alone in our battles!

This story has been relevant to absolutely nothing, don’t you think? Maybe just about being lonely? But you read it didn’t you? Just imagine how much your story might mean to someone else… talk to me! To be quite honest with you, I’m a pretty lonely fellow… I’d love to hear what you have to say!